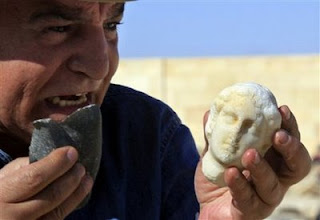 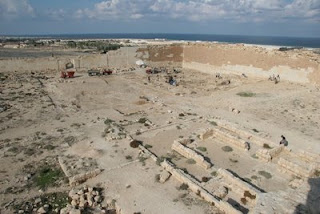 "A radar survey of the temple of Taposiris Magna, west of Alexandria,Egypt, was completed last month as part of the search for the tombof Cleopatra and Mark Antony. The SCA expedition excavatingthe temple and its surrounding area is headed by Zahi Hawass, Secretary General of the SCA, and Dr. Kathleen Martinez, a scholar from the Dominican Republic. (..) Dr. Hawass stated that the cooperation between Egypt and the Dominican Republic for the excavation of the temple hasbeen ongoing for about three years. The recent radar survey is the most significant step taken by the team to date. It was carried out by an Egyptian radar team, with American expert Dr. Roger Vickers servingas a consultant. The radar revealed 3 possible spots of interest wherea tomb may be located. The expedition has received the results of thesurvey, and will begin excavating each of these three spots next week. The most important recent development at Taposiris Magna has been thediscovery of a large, previously unknown cemetery outside the templeenclosure. The expedition has found 27 tombs. 20 of them shaped likevaulted sarcophagi, partly underground and partly aboveground. Theremaining 7 consist of staircases leading to simple burial chambers. Insidethese tombs, the team has found a total of 10 mummies, 2 of them gilded.(..) The style of the newly discovered tombs indicates that they wereconstructed during the Greco-Roman period.Dr. Martinez stated that the expedition has excavated a temple atTaposiris Magna dedicated to the goddess Isis, and discovered coinsdepicting the face of Alexander the Great. They have found a numberof deep shafts inside the temple, three of which seem to have beenused for burials. It is possible that these shafts were the tombs of important people, and the team's leaders believe that Cleopatra andMark Antony could have been buried in a deep shaft similar to those already discovered inside the temple. (..)"Some other smaller finds are mentioned, but these (head, coins and mask) are old news."