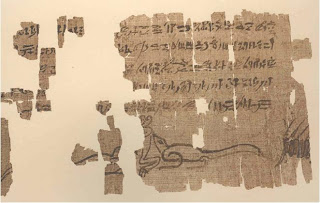 
Magic is an important and one of the oldest ways of comprehending the world. It is a universal phenomenon which crosses cultural as well as social borders. Various civilizations in different time periods understood magic in diverse ways and therefore treated, interpreted and used it differently. Magical texts are one of the best sources to investigate this issue. Some questions that come to mind while reflecting on magical texts can be, e.g.: which texts can be classified as magical, how to categorize magical texts, what purpose did they serve, how were they created, or is a modified or translated text still a magical text.


Magical texts were created in the great and less known civilizations, sometimes distant geographically and in time. They appear in Egypt, Nubia, Mesopotamia, Anatolia, Syria, Palestine, but also on the Indian subcontinent, in Tibet or in China. The influence of various magical traditions is clearly visible in magic developing in the Greco-Roman period. Its elements intermingled among others with the Coptic and Arabic magical systems.


Due to the widespread literature of this kind in the ancient world, there is a need for considerable study of magical texts. New research in this area will help to discredit the untrue image of magic, distorted by a false modern vision.


We would like to cordially invite for the conference the speakers representing different disciplines and research methodologies, since we are convinced that adopting the interdisciplinary and multidirectional perspective will allow us to understand magic, which we regard to be an underestimated cultural phenomenon, in a better and more complete way.


The language of the conference is English.


Registration can be made by sending an e-mail with participant’s name, organizational affiliation and the working title of the presentation to magical.texts@gmail.com. Conference participants are welcome to submit abstract in English (250-500 words) in either .doc or .pdf format.
Registrton deadline: January 31st

All the proposals will be reviewed and arranged into the final program of the conference. Authors will be informed by e-mail on the acceptance of their abstract by March 31
Contact:

Further information will be published at:
http://www.psc.uj.edu.pl/index.php/pl/o_nas/wydarzenia/wydarzenia_2012/civilizations/