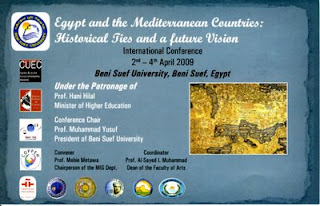 "The suggestion this story is based on was made in 1990 (H. Thur,"Arsinoe IV, eine Schwester Kleopatra VII, Grabinhaberin desOktogons von Ephesos? Ein Vorschlag", JOAI 60 (1990) 43-56). I am surprised it has taken this long for it to attract the attention of TVdocumentary makers, given the fascination for anything to do withCleopatra: it is a sensational conjecture just begging for that kindof attention. But I also think there's been a bit of a rush to judgementjust because it is sensational: that doesn't make it lunatic, let alonewrong. The documentary is not even going to be aired till nextMonday. Seems to me that there are several questions involved here:

-- Was the tomb Arsinoe's? I've always thought Thur made an interesting circumstantial case for this, though in the nature of thingsit could not be conclusive and she herself recognised that. The date of the tomb seems to be right, its position in central Ephesus does seem to indicate a young woman of remarkably high social standing, the decorative elements and tomb architecture do have Egyptian links,whether or not there are other non-Egyptian comparanda, and the skeleton was found in the original sarcophagus, so was almostcertainly that of the tomb-owner, though the grave had been robbed. I think it's a good thing the question is receiving some scrutiny.

-- How old was Arsinoe? For this we have very little data. According to the estimates of the skeletal age quoted here, the woman in the tomb was between 15-18 at death, although Keil's original 1926 discussion, as quoted by Thur, estimated around 20 years old. Supposing her tobe Arsinoe, who died in 41, this would make her between 9 and 12 atthe time of the Alexandrian War in 48/7. We know from De Bello Alexandrino that Arsinoe was younger than Cleopatra. The author (Caesar or Hirtius, take your pick, but certainly a high-ranking participant in the action) describes a dispute between Arsinoe and the general Achillas which resulted in his execution, after which she and her tutor Ganymede took command of the Alexandrian forces, although clearly it was Ganymede was actually running theshow. After it was all over, Caesar banished her, so that shewould not again be a threat. These points say to me that shewas a real actor not just a figurehead; 9-12 sounds rather precocious. But, later, the Alexandrians complain to Caesar of rule by a girl (confectam taedio puellae -- usually mistranslated as "woman", a point I have overlooked in the past). This would make her notolder than about 14 or 15 in 48/7. Combined, the two points suggest that that's how old she really was, which is consistent with Keil's original estimate of the Ephesus woman's age at death. She would then have been born about 62 , I.e. she was either a twin with Ptolemy XIII (cf. Cleopatra VII's twins by Antony) or slightly older or younger. So Keil's estimate of skeletal age is not inconsistent with her being Arsinoe, although the more modern estimate seems to be too low. The various age estimates we have seen for Tutankhamen, the KV55 skeleton and the DB320 royal mummies makes me ratherskeptical that we have a well-calibrated curve for estimating agebased on epiphyseal closure: I.e. how accurately can we reallytranslate the biological maturity of these ancient remains into achronological age?

-- What can we learn about ethnic origins from the skull? Apparently it was lost in the chaos of WWII, but we have a good set ofmeasurements. So maybe we can actually make a good reconstruction. Still, jumping from there to conclusions about ethnic origin, especiallya claim to be able to trace mixed ethnic origins, seems very questionableto me, and I think the methodology needs to be examined closely andsceptically. OTOH the insinuation made in one blog (https://hermes.aegean.gr/owa/redir.aspx?C=b9bdc0e498d04a2db9c77e2e368b127c&URL=http%3a%2f%2fphdiva.blogspot.com%2f2009%2f03%2fstrange-skulls-arsinoes-so-called-tomb.html) -- that we may be dealing with skulls being shaped by binding duringinfancy -- is really jumping the gun: let's at least see what the forensic reconstruction expert has to say. It's a pity these results are apparentlynot going to be formally presented together with the skeletal results.

-- Did Arsinoe IV and Cleopatra VII have the same mother? No one knows. My own opinion is that they did: that the Cleopatra "VI" Tryphaena who ruled with Berenice IV and died in 57 was her mother, not her sister, and was the same Cleopatra V Tryphaena who was Ptolemy XII's "sister" and queen until she disappears from the recordin late 69 -- well after Cleopatra VII was born. That would have Tryphaena dying well after Arsinoe was born on any estimate, and there is no indication of any difference in status between Arsinoe andany of her siblings, nor any indication of a second wife of regal statusequal to that of Cleopatra Tryphaena. But your mileage may vary, depending how trustworthy you regard Porphyry apud Eusebius tobe in his remarks about the events of these years, and how trustworthyyou regard Strabo's assessment to be of the legitimacy of Auletes'children; IMO not very, in either case.

-- What do we know about the mothers of Cleopatra VII, Cleopatra VTryphaena, and Ptolemy XII? Nothing. In a paper I published about10 years ago I argued that the evidence, such as it is, is as consistentwith them all being women of the blood as with any theory of thembeing concubines, whether Greek, Syrian, Egyptian, Ethiopian oranything else; I suggested that the women involved could be, respectively,Cleopatra V Tryphaena, Berenice III (by Ptolemy X), and Cleopatra IV. These conjectures may or may not be right of course; the point here isthat there are several quite radically different reconstructions possiblethat are equally consistent with the evidence.

-- What could we do with DNA if we could get it? There being noother member of the Ptolemaic dynasty whose remains are availablefor comparison, surely not very much. If a candidate skull turned upperhaps we could prove it was the right one for the body".
Posted by Panagiotis Kousoulis at 15:31 No comments:

TIMESonline, 15 Μαρτίου 2009, Daniel Foggo:
"Archaeologists and forensic experts believe they have identified the skeleton of Cleopatra's younger sister, murdered more than 2,000 years ago on the orders of the Egyptian queen. The remains of Princess Arsinöe, put to death in 41BC on the orders of Cleopatra and her Roman lover Mark Antony to eliminate her as a rival, are the first relics of the Ptolemaic dynasty to be identified. (..) Evidence obtained by studying the dimensions of Arsinöe's skull shows she had some of the characteristicsof white Europeans, ancient Egyptians and black Africans, indicating that Cleopatra was probably of mixed race, too. They were daughters of Ptolemy XII by different wives. (..) The forensic evidence was obtained by a team working under the auspices of the Austrian Archeological Institute, which is set to detail its findings at an anthropological convention in the United States later this month. The story of the discovery will also be the subject of a television documentary, Cleopatra: Portrait of a Killer, to be shown on BBC1 at 9pm next Monday. (...)" 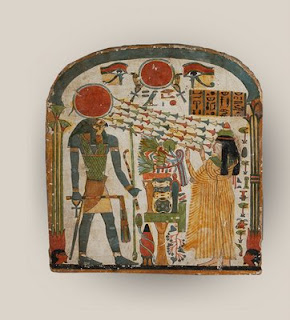 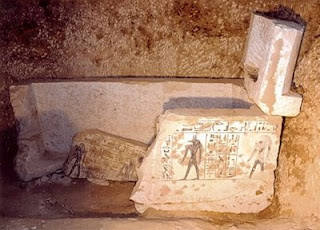 
" (..) Hieroglyphs on a sarcophagus in the tomb identify Isisnofretas a spst, or noblewoman—an honorific reserved for women ofthe royal family or of otherwise exceptional status.(..) The tomb complex measures 89 by 34 feet (27 by 10 meters)[and] includes the base of a pyramid, a monumental gateway, acolonnaded courtyard, and an antechamber with three cult chapels. (..)Though Isisnofret's chapels are in ruins, partly due to looting,archaeologists have found fragments decorated with hieroglyphs. (..)Inside Isisnofret's tomb building, a limestone sarcophagus was foundholding three skeletons—degraded mummies whose ages and sexeshave yet to be determined, according to the preliminary WasedaUniversity report. The team is unsure why the sarcophagus holdsthree bodies, or even what the original state was. The sarcophagusis missing its internal, wooden coffin—perhaps stolen during theancient pillaging that seems to have stripped the tomb of funeraryobjects. (..)"After making DNA tests, we will realize who it is … ," said MohamedEl Ashry, an Egyptologist who works with the Waseda University team.Khaemwaset's "mummy is at the Egyptian Museum, and Ramses II'smummy is also at the Egyptian Museum" in Cairo, El Ashry said—making both readily available for DNA testing. (..)"
Μπορείτε να διαβάσετε ολόκληρο το άρθρο εδώ.

Πηγές: National Geographic/EEF
Posted by Panagiotis Kousoulis at 15:08 No comments: 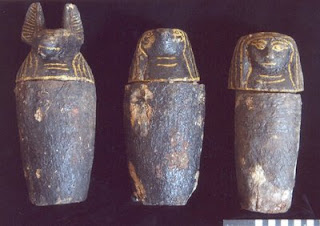 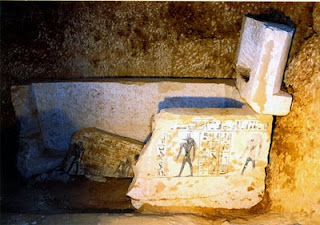 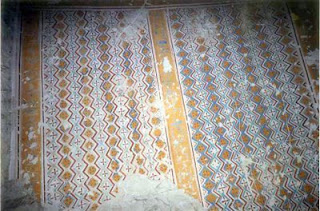